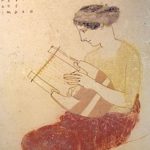 Serakh bat Asher, daughter of Asher, plays a central role in the story of The Light in the Stone.  She is a curious character.  Her story is hinted at in the Old Testament, but never made explicit, which allows plenty of scope for a storyteller.

She is first mentioned as one of Jacob’s family, daughter of his son Asher.
When she is just seven years old, Asher and his brothers ask her to make up a song in which are placed the words ‘Joseph lives.’ and sing this song to her grandfather Jacob.

During the famine which affected the whole area, Asher and his brothers went to Egypt to see if they could buy grain.  There they found Joseph, now an important man in the Egyptian court.

The last time they had seen him before that was twenty years earlier at the bottom of a well!  They had thrown him down there out of fear that Jacob’s love for him would mean they would not inherit their fair share.  They had taken Joseph’s coat – the famous coat of many colours – and covered it in the blood of a goat.  Then they told Jacob his son had been killed by a lion and they had buried him in the mountains.

So, it was no wonder they weren’t sure how to break the news to their father that he was still alive. Especially as he was old and frail.  They asked Serakh to sing it.

But it had an unforeseen consequence.  When Serakh sang ‘Joseph lives’ – Jacob uttered a blessing.
‘May you never taste death and may you enter the kingdom of heaven while you still live’.

And just to underline that fact, she is mentioned again as one of the people who accompany Moses out of Egypt many generations later.

She is mentioned again as showing King David The Foundation stone so he knows where to build The Temple.  Over and over she ‘expedites the realization of the Divine plan.’ There seems to be much more to Serakh bat Asher than we are told.

She is said to have ascended to heaven in the ninth century.  There is a synagogue in Isfahan, which is called the synagogue of Serakh bat Asher and is the place where her ascension is supposed to have taken place.

But where I wonder is she now?