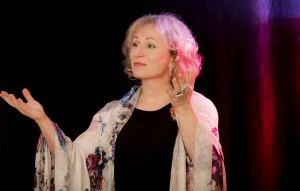 I truly love telling traditional stories and am delighted to find new and interesting environments where storytelling can be enjoyed and add its own special magic.  In the picture (below left) I’m telling stories at  a yoga centre in London called Triyoga.  This is an annual four day ‘Urban Retreat’ at which for the past two years I have told stories to explore the themes of the retreat.  Last year the theme was ‘The Four Aims of Life’ as described in the Mahabharata, namely, Wealth, Duty, Love and Surrender. This year it was based on a quote from writer Allan Watts on ‘The indefinable something which is everything.’ If you open a discussion with a story it goes somewhere far deeper and more interesting than you could have imagined.

I also run occasional workshops, teaching the basic skills of storytelling.  Here’s what was said after the last one:

“Thank you so much for yesterday – it gave me so many new insights into storytelling – some aspects I had not really considered before. Group, venue (‘Green thought in green shade’) and your gentle persuasion & knowledge all came together in something that was truly inspiring – and useful! “
Richard

“Thank you for opening up your home and hosting a wonderful workshop. I gained much confidence in my abilities and enjoyed the afternoon very much.” MP 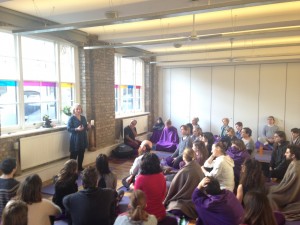 North London Traditional Storytelling Circle is a monthly group for anyone who wants to tell traditional stories (Myths, folk tales, fairy tales, legends) We meet in NW2 on the second Thursday of the month from 7 – 9pm.

We have a facebook group and page and are on Meetup