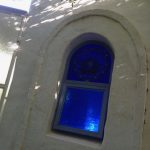 The Light in the Stone is inspired by a story called the Tzohar*. A fragment of first light, the story goes, was placed inside a stone and given to Adam and Eve when they left Eden. This stone then passed down through generations. Whenever the stone appeared, dreams and visions offered a glimpse into a higher reality.
The word ‘Tzohar’ means ‘small window’ or ‘opening’, in Hebrew. It is also linked to the word ‘Zohar’ meaning ‘illumination.’ When the stone appears a window indeed seems to open onto a different order of things, a bigger and more mysterious world.
In the Old Testament description of the creation, light and dark are created on the first day and the creation of the sun, moon and stars on the fourth day. This story was perhaps an attempt to resolve this paradox and echoes other early Rabbinical teachings that this first primordial light was hidden away, presumably to be re-discovered.
This story appears to be very ancient, possibly Babylonian and perhaps its message is universal in hinting at a higher more mysterious encompassing order.
The receiving of this ‘light’ or illuminating wisdom is also linked in the story to inheritance. This could in our modern culture, be taken to be elitist, but I take it to mean that we should not neglect our collective inheritance of story when it comes to seeking wisdom.
The stone is passed down from father to son….hmm, yes father to son. No mention of daughters! In The Light in the Stone I have tried to address this by including the story of a mysterious woman called Serakh Bat Asher, whose extraordinarily long life journey runs parallel to that of the stone… but more of that in the next blog post.